This article has been written with the support of Calmac.

DIY Game of Thrones on the Scottish isles

There's a whiff of Westeros in the air out there…

Some claim George RR Martin's inspiration for the Iron Islands in Game of Thrones comes from the Vikings, others say it's Iceland – we find it hard to differentiate those two anyway. Another theory links this archipelago, home to tough, seafaring people off the west coast of Westeros, with the Hebridean chain of hundreds of islands off the west coast of Scotland. What better way to see off the wait for season 7's return on 16 July than by heading out on adventures in your own version of Westeros?

Let's not beat about the heather: only one letter separates the seat of the Lord of the Iron Islands from Skye, the largest island of the Inner Hebrides. And, call us crazy, but doesn't Pyke bear a passing resemblance to Dunvegan Castle, crossed with the Old Man of Storr…

Never mind that the Old Man of Storr popped up in Prometheus, smarty pants. Let's not conflate our TV fantasy with failed sci-fi sequels.

Home to House Farwynd of the Lonely Light, it is the smallest island of the eight main Iron Islands and is itself a mini achipelago surrounded by rookeries of seals and located an eight-day sail northwest of Great Wyke. Likewise, St Kilda is 40 miles west-northwest of North Uist, unpopulated for 2,000 years but whose largest isle, Hirta, was once occupied by 180 hardy islanders. These days the island is home to one of the world's largest colonies of northern gannets, Atlantic puffins and seals.

And the sea cliffs are something else…

Boy oh boy, could you ever host your own Kingsmoot on the hexagonal basalt coastline of Staffa, complete with thoroughly dramatic cliffs, imposing sea and wind-lashed coastline.

And perhaps, following the advice of these guys, always give the second speech at a Kingsmoot if you don't want to get usurped by your uncle for the throne. Take heed though: the Greyjoys Theon and Yara are set for a comeback, mark our words.

King of the North?

If you're more Stark than Greyjoy – and who could blame you – there's plenty in-land that has overtones of Westeros. If you're looking for something magical, we think the Fairy Pools of Skye have echoes of the Winterfell Godswood. 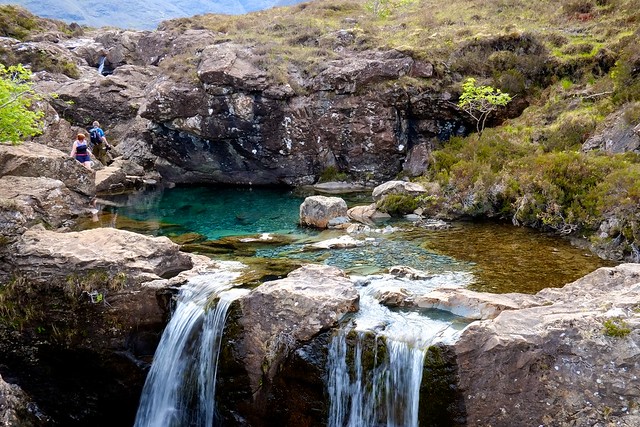 Fist of the First

Let's take a little look at what second GoT novel A Clash of Kings says about the famous Fist of the First Men:

'It was the ringwall that drew Jon's eye, the weathered grey stones with their white patches of lichen, their beards of green moss. It was said that the Fist had been a ringfort of the First Men in the Dawn Age. An old place, and strong…these heights will be easy to defend, if need be.'

Reminds us of the Neolithic wonder that are the Callanish Stones of Lewis. Just remember, if you hear any horns blowing, one blast is for rangers returning, two is for wildlings, three for white walkers…

Considering how much of Scottish history inspired the world of Game of Thrones, and the abundance of castles lying around the place, the only limit for recreation is your imagination… and dragons.

Make huge savings on your first order from Naked Wines

Illuminated light trails near you…